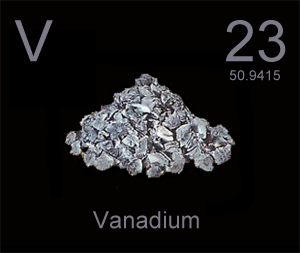 In 1801, the Mexican mineralogist Andrés Manuel del Río discovered a new element similar in nature to chromium and uranium when he studied lead ore. Its salt is red when heated in acid, so Leo named it red mud. However, it is actually vanadium.

In 1830, the Swedish chemist Nils Gabriel Sefström isolated a new element in the refining process of iron. Due to its brilliant color, he named it Vanadium under the name of the beautiful goddess Vanadis in Greek mythology. In the same year, the German chemist Friedrich Wöhler proved that Vanadium was the same element as the red element discovered by the early Andrés Manuel del Río – vanadium.

In 1867, the British chemist Henry Roscoe reduced the vanadium chloride (VCl3) with hydrogen to produce metal vanadium for the first time.

The origin of the name

A long time ago, a beautiful goddess named Vanadis lived in the far north. One day, a distant guest came knocking on the door. The goddess was sitting leisurely on the circle chair. She thought: If he knocked again, I would open the door. However, the knock on the door stopped and the guest left. Vanadis wants to know who this person is, why is he so lacking in self-confidence? So she opened the window and looked out. It turned out that a man named Wöhler was coming out of her yard. A few days later, the goddess heard someone knocking on the door again, and the knocking of the door didn’t stop until the goddess opened the door. This is a young and handsome man named Sefström. The goddess soon fell in love with him and gave birth to his son, vanadium.

The application history of vanadium

After discovering the metal of vanadium, people gradually learned about its properties and began to apply it to our daily lives. In 1882, a British company used vanadium-containing slag containing 1.1% vanadium to produce vanadium phosphate with an annual output of about 60 tons.

In the late 19th and early 20th centuries, Russia began to reduce iron and vanadium oxides by carbon reduction, and for the first time prepared vanadium-iron alloys (including V35% to 40%). From 1902 to 1903, Russia tested an aluminothermic method for the preparation of ferrovanadium.

At the end of the 19th century, the study also found that vanadium can significantly improve the mechanical properties of steel in steel, making vanadium widely used in industry. By the beginning of the 20th century, people began to mine vanadium.

So far, the world’s vanadium-producing ore is mainly composed of vanadium-titanium magnetite, and there are abundant resources in Russia, South Africa, China, Australia and the United States. In addition, vanadium uranium, bauxite, phosphate rock, carbonaceous shale, petroleum combustion ash, spent catalyst, etc. can also be considered as resources of vanadium.

This is a history column, aiming at introducing the discovery of different kinds of metals. If you are a metal lover or history lover, you can follow our website. For previous posts of this column please search the keyword “history”.

7 thoughts on “Discovery and application of vanadium | History of Vanadium”