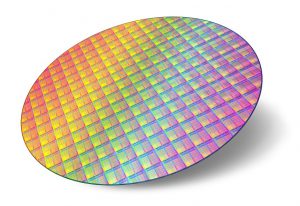 The sandstone material is placed in a 2000 °C electric arc furnace which has a carbon source. At high temperatures, the silica in the carbon and in the sandstone undergoes a chemical reaction (carbon is combined with oxygen, leaving silicon) to obtain pure silicon having a purity of about 98%, also known as metallurgical grade silicon. This purity of silicon is not sufficiently pure for microelectronic devices because the electrical properties of the semiconductor material are very sensitive to the concentration of impurities and therefore require further purification of the metallurgical grade silicon. The pulverized metallurgical grade silicon is chlorinated with hydrogen chloride gas to form a liquid silane. Then, through distillation and chemical reduction processes, high-purity polycrystalline silicon is obtained, which has a purity of up to 99.999999999%, and is called electronic grade silicon. SAM Sputter Target offers electronic-grade silicon sputtering targets and silicon evaporation materials of high purity.

After the single crystal silicon is grown by the Czochralski method, the single crystal rod is cut in an appropriate size, and then ground to grind the notch, and then at least one side is smoothed as a mirror by a chemical mechanical polishing process. The diameter of the single crystal silicon rod is determined by the speed at which the seed crystal is pulled out and the rotational speed. In general, the slower the pull-up rate is, the larger the diameter of the grown single crystal silicon rod is. The thickness of the wafer is related to the diameter. Although the semiconductor device is prepared only in the range of a few micrometers at the top of the wafer, the thickness of the wafer is generally 1 mm to ensure sufficient mechanical stress support. Therefore, the thickness of the wafer will increase as the diameter increases. The wafer manufacturer melts the polysilicon, implants the seed crystal in the melt, and then slowly pulls it out to form a cylindrical single crystal silicon ingot, which is determined by the orientation of the crystal ingot. The seed crystal is gradually formed in the molten silicon raw material, and this process is called “long crystal”. After the silicon ingot is cut, barreled, sliced, chamfered, polished, laser engraved, and packaged, it becomes the basic material of the integrated circuit factory – silicon wafer, also called semiconductor wafer.

Stanford Advanced Materials (SAM) Corporation is a global supplier of various sputtering targets such as metals, alloys, oxides, ceramic materials. If you are interested, please visit our website https://www.sputtertargets.net/ for more information.

Related: What is Anelva Targets?